Back to top
Edit this page

We will be using REINFORCE, one of the earliest policy gradient methods. Unlike going under the burden of learning a value function first and then deriving a policy out of it, REINFORCE optimizes the policy directly. In other words, it is trained to maximize the probability of Monte-Carlo returns. More on that later.

Inverted Pendulum is Mujoco’s cartpole but now powered by the Mujoco physics simulator - which allows more complex experiments (such as varying the effects of gravity). This environment involves a cart that can moved linearly, with a pole fixed on it at one end and having another end free. The cart can be pushed left or right, and the goal is to balance the pole on the top of the cart by applying forces on the cart. More information on the environment could be found at https://gymnasium.farama.org/environments/mujoco/inverted_pendulum/

Training Objectives: To balance the pole (inverted pendulum) on top of the cart

Actions: The agent takes a 1D vector for actions. The action space is a continuous (action) in [-3, 3], where action represents the numerical force applied to the cart (with magnitude representing the amount of force and sign representing the direction)

Approach: We use PyTorch to code REINFORCE from scratch to train a Neural Network policy to master Inverted Pendulum.

An explanation of the Gymnasium v0.26+ Env.step() function

env.step(A) allows us to take an action ‘A’ in the current environment ‘env’. The environment then executes the action and returns five variables:

We start by building a policy that the agent will learn using REINFORCE. A policy is a mapping from the current environment observation to a probability distribution of the actions to be taken. The policy used in the tutorial is parameterized by a neural network. It consists of 2 linear layers that are shared between both the predicted mean and standard deviation. Further, the single individual linear layers are used to estimate the mean and the standard deviation. nn.Tanh is used as a non-linearity between the hidden layers. The following function estimates a mean and standard deviation of a normal distribution from which an action is sampled. Hence it is expected for the policy to learn appropriate weights to output means and standard deviation based on the current observation.

Now that we are done building the policy, let us develop REINFORCE which gives life to the policy network. The algorithm of REINFORCE could be found above. As mentioned before, REINFORCE aims to maximize the Monte-Carlo returns.

Following is the overview of the training procedure

for seed in random seeds

for episode in range of max number of episodes

until episode is done

sample action based on current observation

take action and receive reward and next observation

store action take, its probability, and the observed reward

Note: Deep RL is fairly brittle concerning random seed in a lot of common use cases (https://spinningup.openai.com/en/latest/spinningup/spinningup.html). Hence it is important to test out various seeds, which we will be doing. 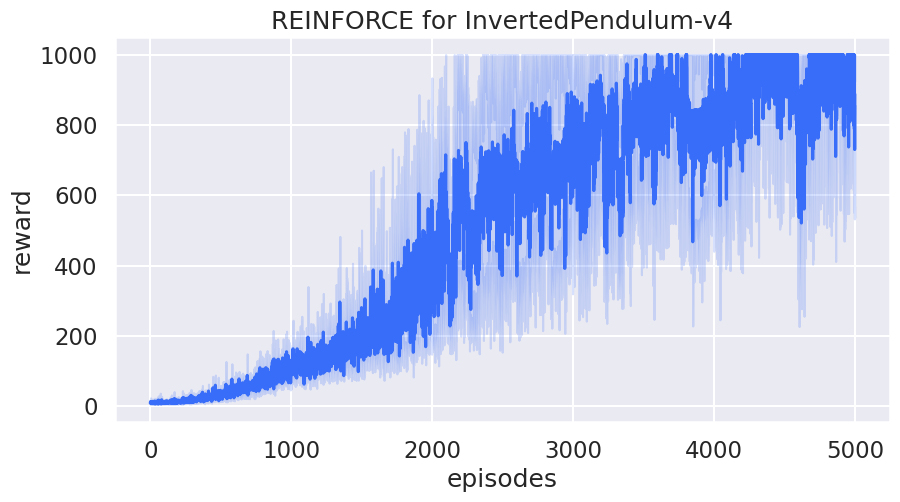