Back to top
Edit this page

In this tutorial, you’ll learn how to use vectorized environments to train an Advantage Actor-Critic agent. We are going to use A2C, which is the synchronous version of the A3C algorithm [1].

Vectorized environments [3] can help to achieve quicker and more robust training by allowing multiple instances of the same environment to run in parallel (on multiple CPUs). This can significantly reduce the variance and thus speeds up the training.

We will implement an Advantage Actor-Critic from scratch to look at how you can feed batched states into your networks to get a vector of actions (one action per environment) and calculate the losses for actor and critic on minibatches of transitions. Each minibatch contains the transitions of one sampling phase: n_steps_per_update steps are executed in n_envs environments in parallel (multiply the two to get the number of transitions in a minibatch). After each sampling phase, the losses are calculated and one gradient step is executed. To calculate the advantages, we are going to use the Generalized Advantage Estimation (GAE) method [2], which balances the tradeoff between variance and bias of the advantage estimates.

The A2C agent class is initialized with the number of features of the input state, the number of actions the agent can take, the learning rates and the number of environments that run in parallel to collect experiences. The actor and critic networks are defined and their respective optimizers are initialized. The forward pass of the networks takes in a batched vector of states and returns a tensor of state values and a tensor of action logits. The select_action method returns a tuple of the chosen actions, the log-probs of those actions, and the state values for each action. In addition, it also returns the entropy of the policy distribution, which is subtracted from the loss later (with a weighting factor ent_coef) to encourage exploration.

The get_losses function calculates the losses for the actor and critic networks (using GAE), which are then updated using the update_parameters function.

The Actor-Critic combines elements of value-based and policy-based methods. In A2C, the agent has two separate neural networks: a critic network that estimates the state-value function, and an actor network that outputs logits for a categorical probability distribution over all actions. The critic network is trained to minimize the mean squared error between the predicted state values and the actual returns received by the agent (this is equivalent to minimizing the squared advantages, because the advantage of an action is as the difference between the return and the state-value: A(s,a) = Q(s,a) - V(s). The actor network is trained to maximize the expected return by selecting actions that have high expected values according to the critic network.

The focus of this tutorial will not be on the details of A2C itself. Instead, the tutorial will focus on how to use vectorized environments and domain randomization to accelerate the training process for A2C (and other reinforcement learning algorithms).

When you calculate the losses for the two Neural Networks over only one epoch, it might have a high variance. With vectorized environments, we can play with n_envs in parallel and thus get up to a linear speedup (meaning that in theory, we collect samples n_envs times quicker) that we can use to calculate the loss for the current policy and critic network. When we are using more samples to calculate the loss, it will have a lower variance and theirfore leads to quicker learning.

A2C is a synchronous method, meaning that the parameter updates to Networks take place deterministically (after each sampling phase), but we can still make use of asynchronous vector envs to spawn multiple processes for parallel environment execution.

The simplest way to create vector environments is by calling gym.vector.make, which creates multiple instances of the same environment:

If we want to randomize the environment for training to get more robust agents (that can deal with different parameterizations of an environment and theirfore might have a higher degree of generalization), we can set the desired parameters manually or use a pseudo-random number generator to generate them.

Here we are using normal distributions with the standard parameterization of the environment as the mean and an arbitrary standard deviation (scale). Depending on the problem, you can experiment with higher variance and use different distributions as well.

If you are training on the same n_envs environments for the entire training time, and n_envs is a relatively low number (in proportion to how complex the environment is), you might still get some overfitting to the specific parameterizations that you picked. To mitigate this, you can either pick a high number of randomly parameterized environments or remake your environments every couple of sampling phases to generate a new set of pseudo-random parameters.

For our training loop, we are using the RecordEpisodeStatistics wrapper to record the episode lengths and returns and we are also saving the losses and entropies to plot them after the agent finished training.

You may notice that the don’t reset the vectorized envs at the start of each episode like we would usually do. This is because each environment resets automatically once the episode finishes (each environment takes a different number of timesteps to finish an episode because of the random seeds). As a result, we are also not collecting data in episodes, but rather just play a certain number of steps (n_steps_per_update) in each environment (as an example, this could mean that we play 20 timesteps to finish an episode and then use the rest of the timesteps to begin a new one). 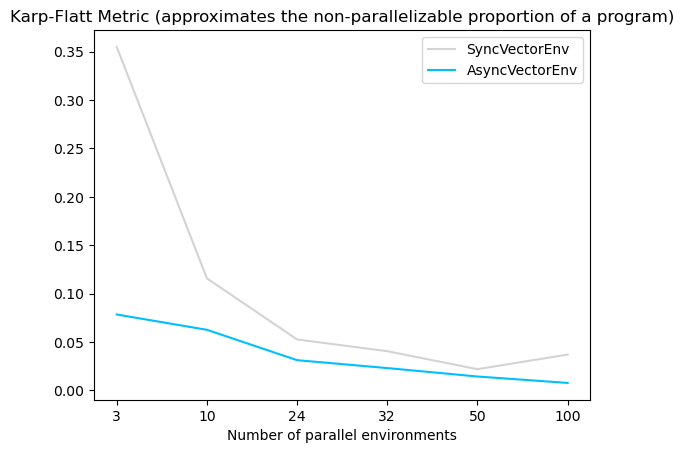 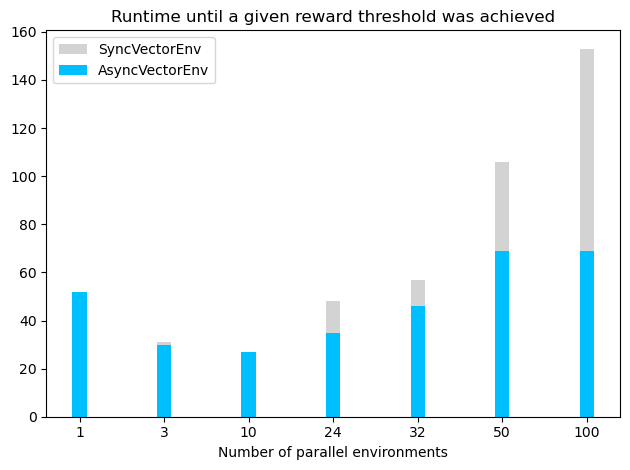 Try playing the environment yourself#